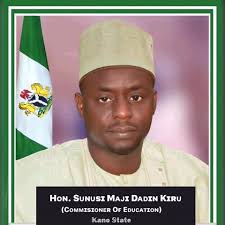 Kano State Commissioner of Education, Sanusi Muhammad Sa’id Kiru [Maji Dadin Kiru] has debunked the rumor in wide circulation that schools in the state will re-open on 14th June, 2020. This was contained in a press statement signed by Aliyu Yusuf, the Chief Public Relation Officer of the Ministry.

The statement further says the state government is equally worried and concerned about the interruption of the academic calendar, stressing that the decision for the closure of the schools was inevitable due to the government’s determination to prevent the spread of the deadly Covid-19 pandemic amongst our school going pupils and students in the State.

While pleading with the Parents, Guardians, School Proprietors and the general public to be more patient, he says an official statement for the re-opening will be issued as soon as final decision is reached between the Federal and State governments. State Commissioners of Education and other relevant stakeholders are currently working on a document in consultation with the Presidential Task Force on Covid-19 to workout modalities for the re-opening of schools in accordance with set guidelines.

Sa’idu Kiru also says due to the importance attached to the issue of re-opening the schools, the 36 State Commissioners of Education under the leadership of the Federal Ministry of Education are in serious consultations with each other with a view to have a proposal submitted to the government.

Group conducts outreach, gives out Face Masks and Foodstuffs to residents in Jos